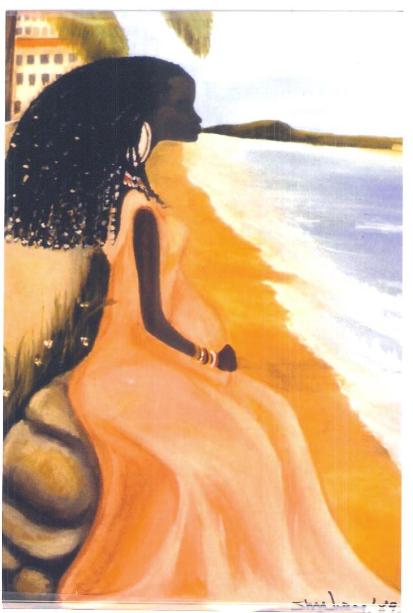 This was an oil on canvas painting, sold during an exhibit at the University of Houston in 1990,   and is one of several “Madonna” or Goddess painting themes I completed during the 80’s & 90’s.  It is my favorite from the  entire Goddess/ Madonna collection, both past and present, as I believe it  symbolizes the spiritual emphasis of this website.

The theme is representational, in that she represents the Goddess of Creation…who is always full of life (pregnant),  with creative energy.  She is seated at the edge of a shore, in a semi-meditative state, embracing and taking in everything, or the awareness of non-duality: that everything is created, sustained and ultimately destroyed by God.   The distant mountains which ends at (or proceeds from) her mouth/nose, represents where the physical breath of life begins and ends.

Although this print version does not show it, she is not wearing shoes.  This was an attempt to symbolize humility, respect and receptivity to the earth.   She is seated on a throne of large stones, which represents her spiritual strength and love for God, who is the source of her creative power.

She is dressed in a long flowing orange - peach colored gown.  The intention with this color was to represent courage and resoluteness in duty, while the softer hues of pink, represents a graceful  state of peacefulness. Her head is held in a slight upward tilt, to again emphasize her resolve and courage.    The adornments, about her arms, neck and hair, indicates that she is the mother of both wealth and wellbeing.  Notice also the building behind her, raised or sitting on a hill.  This represents nobility as well as familiar or earthly ties, which she has left but not forgotten during her servitude to God.   The tree, with it’s branches extending and draping softly over her head, represents her friendship with nature.   The flowers are symbolic of her children, or nature itself.

Although I didn’t do any research before painting this picture, I had read or hear about rituals in so called primitive societies, where part of the religious culture included recognizing, honoring, or offering prayers to certain aspects of nature which held enormous and unseen powers of God, such as the ocean, the sea, rivers, earth, sun, and the wind and sky.  By honoring these natural aspects of God, it was believed that this would insure God was pleased, and He would sustain and bless these places.  Whether these traditions are true or not, the idea behind this painting was to symbolically represent and convey this as an aspect of the Goddess, and what I believe about the feminine nature of the creative spirit.

No portion of this article maybe copied or reproduced in any form without written express permission from the author, Shirley A Davis. 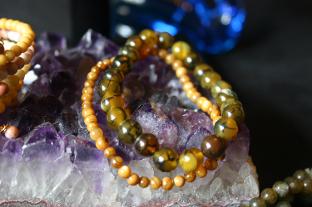 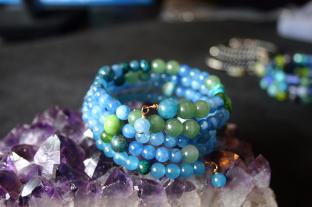 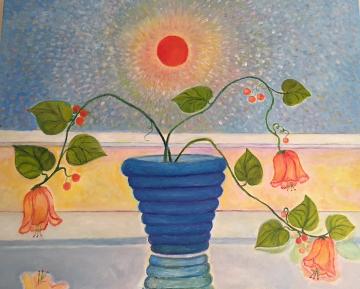 “There came a time when the risk to remain tight in the bud was more painful than the risk it took to blossom. “  Anias Nin 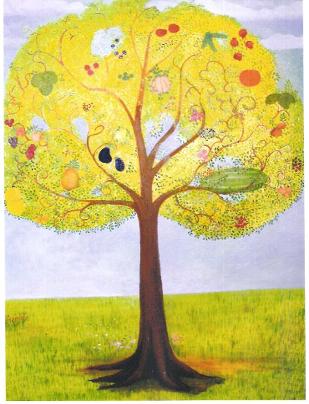 Tree of a thousand fruits

They hold the secrets,deeds done, past and gone.

silently shouting to the heavens in steady streams of prayers,

knowing that everything has an appointed purpose, time…

when even they will reap understanding.

Giant phantoms which can be seen, yet remain invisible;

which can be heard, yet remain silent;

which can be touched, but not felt.

Knowing how to dissolve differences and indifferences,

Indeed they are awake, though awkward in being.

Yet if not for their awkwardness on what would I hang my dreams?

They feel my pain and see my sorrow.

They are the catchers of dreams,

Tenderly preserving them in their great sacred chests

And over a course of time… 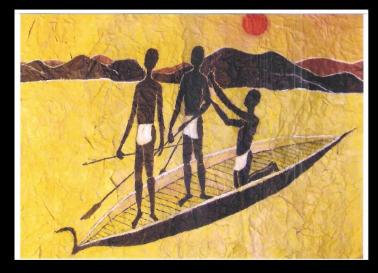 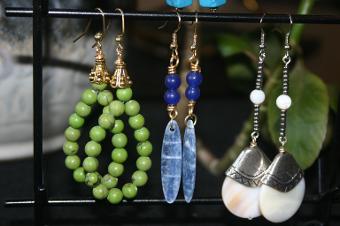 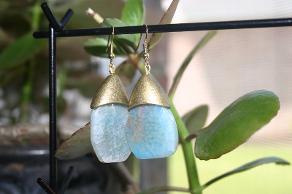 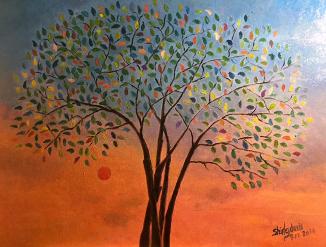 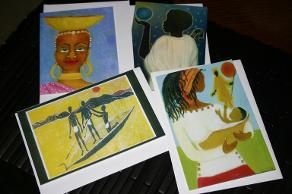 Also, see the Resources & Links for a list of new links:  resources-and-links.php