The Magic of Kite

The Magic of Kite Flying

“It’s a plane!  It’s a bird! It’s…it’s…”  only a kite.  The word kite gets it’s name from a bird called a kite, known for it’s long narrow wing span and graceful flowing ease in flight.   However, the kite discussed in this article is not the two wing, feathered variety.   Made of simple light weight material such as paper, plastic or nylon fabric and often set in a wooden or aluminum frame, attached to a line (string), when properly constructed, given favorable wind speed and, of course, a skillful flyer, the kite is magically transformed into a flying machine that is capable of soaring to distances of several thousands feet in the air.

Though not necessarily confused with an unidentified flying object (UFO), the various shapes, sizes and colors of kites might certainly cause someone to look twice, point and gaze in wonder.   In true acrobatic style of aerial feats, the kite dips, dives, spins and twirls… to grab hold the wind's lift.  The wind’s lift  helps to navigates it’s direction, and eventually helps to guide it to  a place in the sky where, if successful, it anchor’s itself at a lofty height.   Kite flying is a sport that attracts the attention of  both young and old.

Dating back to more than 2000 years, kite flying originated in China.  Part of its early history shows that kites were used in military maneuvers.  One such account includes the aid of bamboo pipes.  Pipes were attached to the kites frames and flown over enemy territory at night.  Hearing the noise of wind rushing through the pipes and thinking they were under the attack of evil spirits, the enemy fled in fear.

But kites have played a more lasting and entertaining role in the culture and tradition of China.  For instance, the traditions and customs of kite flying during religious or New Year celebrations in China, Japan and other Eastern countries has long been part of the festive displays.   Many of the  kites used in these celebrations are colorful and elaborate in  design.  The designs are cleverly  crafted to mimic the shapes of animals or resemble the shapes of symbols which represents  the flyer’s gratitude for blessings received in the previous year and or the prayers, whishes and hopes for the coming year.

Kite flying in Western cultures, while not steeped in the rich history and customs of the East, represents a link to aviation and our innate curiosity about flight.   There are several accounts in which kites have been used as man lifters.   One version of these types kites, the box kite, was used lift a man across the English Channel.  A  French man by the name of C. Jobert, designed a type that was used to rescue sailors who had been ship wrecked in storms.   A rope was attached to the kite, which was strong enough to endure forceful storm winds,  and then flown over the wrecked ship close enough to allow those on board to grab the lowered rope and be lifted to safety.

Alexander Graham Bell, the inventor of the telephone, experimented the four-faced box kite.   He envisioned that a combination of these types of kites could lead to an aircraft that would carry people.   To study their theories about flight and flying, the Wright brothers also utilized the box kite.

In addition to the uses discussed above, kites also played a significant role in other scientific studies.   Meteorologists, during the 19th century, used kites to measure wind velocity and air temperature variation at rising altitudes.  Prior to this, in 1752, Benjamin Franklin conducted the famous experiment in which he attached a key onto the line of a kite during a thunderstorm.   This experiment proved that lighting was a natural source of electricity.

Even though the kite has moonlighted it’s share of odd jobs and uses, when most people think of a kite what probably comes to mind first is the object used in the sport and hobby of kite flying.   Requiring some assembly, however,  no batteries, fuel or internet connection is needed to operate this gadget.   Yet it can be counted on for hours of fun, amusement and excitement for even the amateur kit flyer.

It is no magic carpet but the ingenuity behind it’s simplistic design and construction, the combination the physics and gravity working together, supplies the magic to give it flight.  What is meant by magic is the power of the kite to adapt to wind force by utilizing it’s own resistance against wind pressure.  A kite flies when it’s face, the side that’s  covered, pushes against the wind as the line pulls it noes upward and into the air.   This push or struggle, called a drag, positions the kite into an angle, a leaning forward into the wind known as the angle of attack.   The  angle causes more air pressure to hit the covered surface of the kite, and less at it’s back.   The uneven flow in air pressure between the front and back surfaces creates the lift which gives it flight.   Once the wind takes hold of it, what causes it to anchor or hover in the sky?   It is the shared power and alignment of gravity, drag, line pull and the forces of lift.   All of these forces must work in a balanced way to keep the kite in flight.

If you have ever flown a kite, you probably know already that you need an open space.   Its not a good idea to fly kites where there is traffic, near airports, near trees or tall buildings.   The best places to launch a kite are school playgrounds, parks, fields, empty parking lots and beaches.   Kites can be flown anytime when there is sufficient wind speed.   And if you want to be technical, experts suggest that wind speeds of 4-10 miles is best for flying a kite.    As a general rule, winds that cause tree top leaves to move and sway gently is probably sufficient to fly a kite.   On the other hand, unless you’re a scientist like Benjamin Franklin, it’s not a good idea to fly  kites in stormy and rainy weather.   March and April are considered the best seasons for kite flying.

Now that you know a bit more about kites, perhaps you would like to try one out for yourself.   If it’s your first attempt, you’ll probably want to ask someone who has had some experience with flying one, such as an older sibling or parent.  They can help you assemble it and with getting it started.   Have fun and happy kite flying!

1.The kite is named after it’s inventor,  Alexander Kite.    False.  Kites gets it’s  name from a bird known as a kite.

2.  Tools and equipment needed to fly kites include batteries, string, wooden dowel rods and wind power.   False.  Batteries are not required to fly a kite.

3.  One of the earliest uses of kites includes it’s use in military maneuvers.  True

4.  The box kite was used as a man lifter to lift sailors and other stranded in storms over water, to safety.  True

If you are unsure of the meaning of the words highlighted, take a few moments to explore their meanings or definitions online.

Making kites can be just as much fun as flying one.  Use the internet to explore articles about “kite making” , “kite assembly instructions, tools and equipment”.  Don’t worry if it doesn’t fly as well as one you may have bought.  You can always use it to decorate your room or even give it as an art gift to your teacher or friend.   Since kite making is a form of artistic expression, be sure you sign it when it’s completed!

If you want to let me know the outcome of your project, please email pictures, or a short story about your adventure making your own  kite or just  flying one.

My Favorite Place to Play

My favorite place to play

where I can stay all day,

is not in my room…

I get bored there soon.

It’s not in the den…

In my back yard,

I can play really hard.

I can run, jump and even sing a tune,

pretend I’m an airplane or sail a balloon.

There are puddles to jump in,

mud, a sandbox and grass to rump in.

There’s so many bugs…but some I can’t touch.

There’s my cat named Lady and my dog named Ruff,

bees, fireflies and birds in the sky.

Once I saw a squirrel chased by a butterfly. 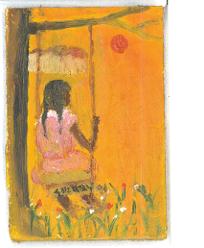 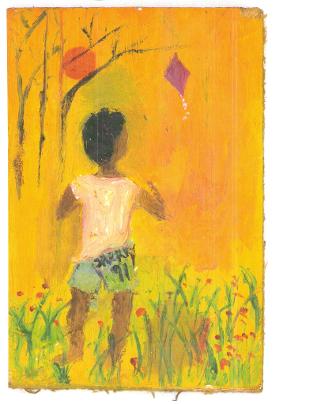 When the leaves turn brown,

and fall to the ground,

I sweep them up in a great big mound.

Pretend I’m a soldier hiding on a hill…

I only pretend though, ‘cause it’s not nice to kill.

When it gets real cold,

and down comes the snow

skate on ice if it’s not too, thin.

In my backyard I can run real fast,

throw up a ball, roll in the grass.

It’s my favorite place to play

because I can play there everyday.

by Shirley Davis, ©2003 All rights reserve